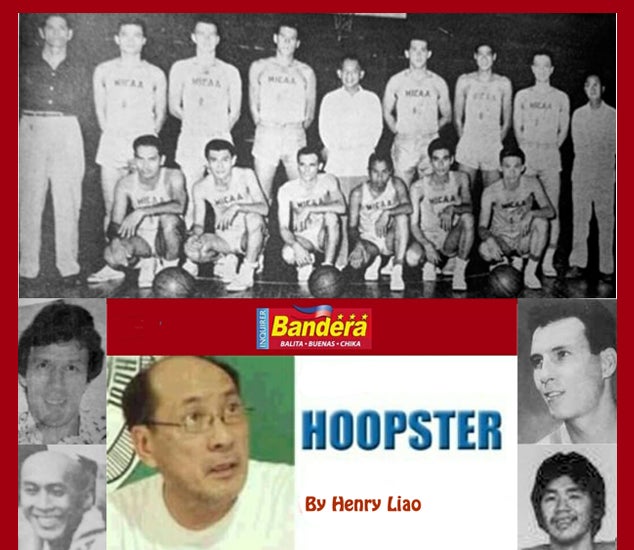 It was the year 1956. A MICAA All-Star team toured Japan and went 5-1 against Japanese squads.

In the photo, there was this tall, mestizo-looking guy standing in the second row (fourth from left) that starred for YCO throughout his distinguished career. Who is he? His initials are CL. 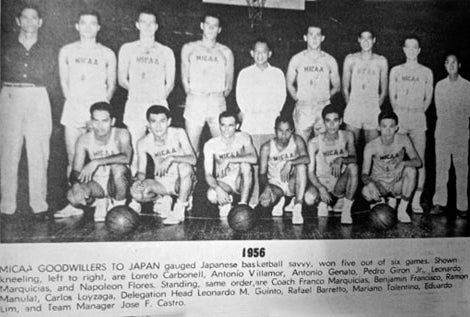 62. Seldom did we see this speedy, mestizo-looking player hot-tempered on the hard floor as what happened in a game between Yco Athletic Club and league newcomer ITM in the opening game of the MICAA tournament in early February of 1976.

A few months later, he and his backcourt partner Miguel Bilbao joined the Tanduay Distillers, the Don Manolo Elizalde-owned squad in the PBA.

In photo, Yco team official Carlos Loyzaga (with a cigar in his mouth) is seen holding back this furious player. 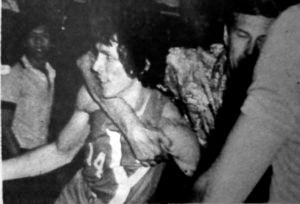 63. With more extensive research, I was able to secure the lineups of the UE and FEU teams that played in the 1974 UAAP finals.

The Red Warriors, coached by Filomeno (Pilo) Pumaren Jr., regained the UAAP crown following a two-year reign by the Tamaraws.

Before 1974, UE won seven consecutive UAAP men’s championships from 1965 to 1971, including a shared title with UST in 1967 when head coaches of both schools would not reveal beforehand their starting fives to open the second half.

Ironically, just a few weeks later, the top player for each team – Danilo Florencio of UST and, Robert Jaworski of UE – would eventually join hands to become members of the so-called “Dirty Dozen” Philippine national squad that beat legendary shooter Shin Dong Pa and host South Korea, 83-80, in the finals to regain the 1967 ABC crown that it surrendered two years before to Japan.

In the aforementioned photo, what is the name of the player with the No. 18 jersey? His initials are ROK. 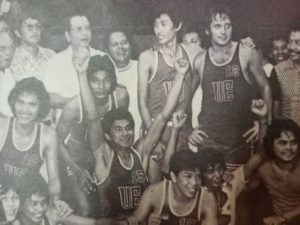 64. This 6-foot wingman was famous for his unerring jumper with one leg up front. The Sta. Ana, Manila native was a key member of Ateneo de Manila University’s 1969 NCAA title team.

He played his entire three-year PBA career (1975-77) with the Seven-Up Uncolas, averaging 13.2 points in 51 appearances.

Baby Boy, what is his name? His initials are RM. 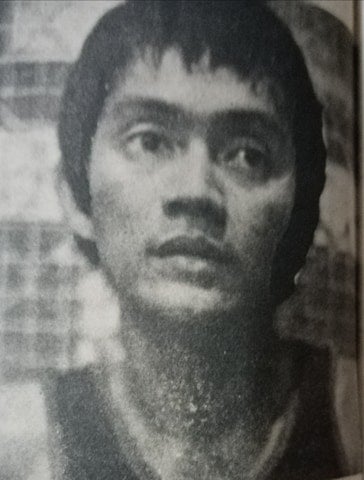 65. In 1967, the 1st Intercontinental basketball tournament for players 5-11 and under was held in Barcelona, Spain.
The Philippines, coached by the legendary Carlos (Caloy) Loyzaga, placed third behind the United States and Spain.

Who is the guy with the No. 13 uniform? His initials are EM. 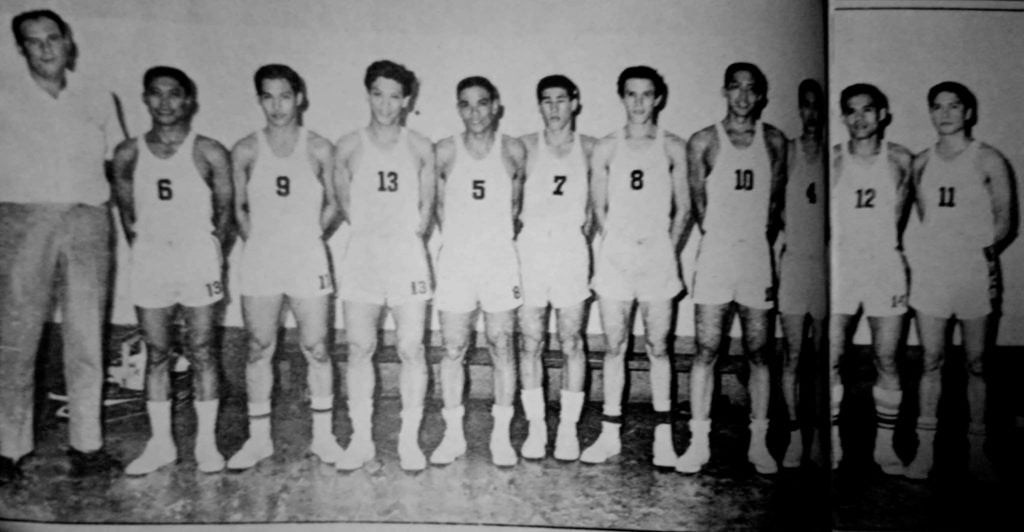 He is said to be prayerful. Who is he? His initials are AD. 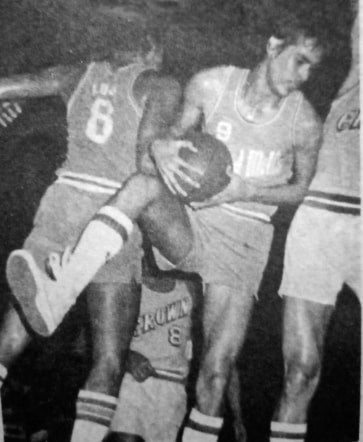 But what made this 6-3 center-guard “colorful” was the color of his basketball footwear. While every basketball player wore the traditional white-colored shoes to the games (mostly featuring the three-stripe ones), this guy broke

the “color” barrier by wearing black-colored Chuck Taylor shoes in the mid-1970s.
What is his name? His initials are DR. 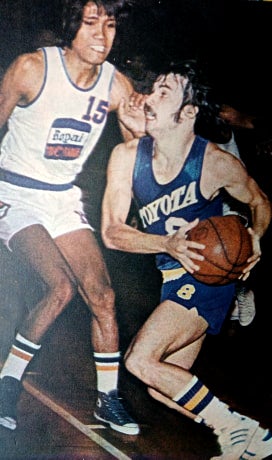 68. This defense-minded 6-1 guard spent his college career with the UE Red Warriors, capturing a UAAP title in 1974. At the time, it was already evident that his hair tops were receding little by little so much so, it was more convenient for him to just shave his head clean when he turned professional.

And boy was he darling of the crowd for a different reason. The Catbalogan, Samar native sported a bald look, not minding the fans that shouted “Kalbo” or “Kojak” at him.

Off the court, don’t mess up with the vegetarian for he also was a first dan karate blackbelter.

After his playing days were over, he became a referee in the PBA and dabbled in local politics, first serving as a councilor in Caloocan City before rising to become its vice mayor.

There’s an interesting story about him. After graduating from Novaliches High in 1971, in his desire to further his studies, he took a job as a member of the UE Security Department. It was during an inter-department league in school that one-time national team player Roehl Nadurata saw him play. And an impressed Nadurata, a former Red

Warrior, encouraged him to join the UE team tryouts in 1972.

What is his name? His initials are LV. 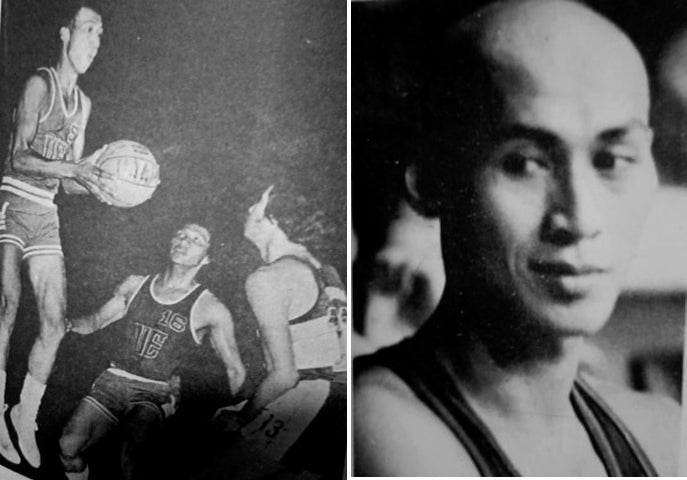 69. Long before there was an Allan Caidic, this No. 7 guy, a sharpshooting 6-foot forward out of the University of Manila, was the meal ticket of CFC Presto Ice Cream Makers in the MICAA in 1974 and topped the team in point production in each of his first two seasons in the PBA (1975 and 1976) when the franchise was named the N-Rich Creamers, before eventually evolving into the Great Taste Discoverers.
In the photo, he even looks like Caidic. What is his name? 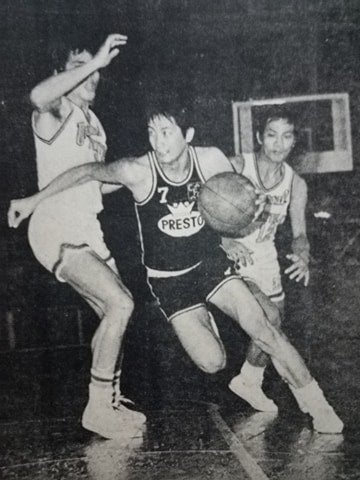 70. San Miguel’s Manny Paner tries to corral the rock from this player. Right after gifting De La Salle with its second NCAA crown in four years in 1974, this guy made his MICAA debut with Mariwasa. Mariwasa Noritake owner Emerson Coseteng protested that it should have been the Seven-Up Uncolas that had the rights to this ace shooter’s services when the PBA opened shop in 1975. This 5-11 shooting guard with a 30-30 rifle, though, forced his way to Concepcion Carrier because his college coach Valentin (Tito) Eduque was the head coach there.
What is the name of this No. 10 Mariwasa player? His initials are LEB. 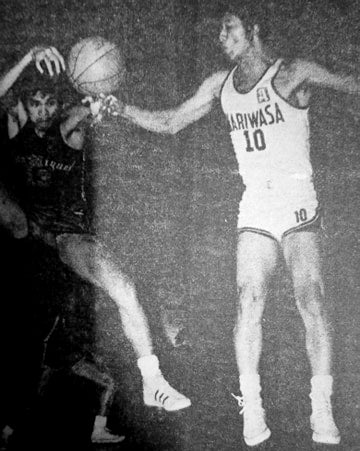