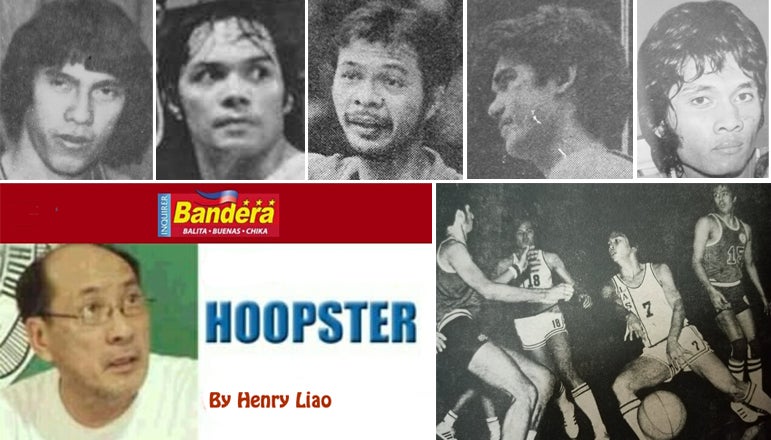 51. BALD is beautiful. The Ysmael Steel Admirals was the first team in Philippine basketball history to have the heads of its players and coaches clean-shaven before taking to the hardwood after it failed to defend the prestigious national senior crown in 1967 following a six-year title stranglehold, one short of the Yco Painters’ seven-year reign from 1954 to 1960.

Nearly three decades later, a team in the PBA also made a “bald” statement. In May 1994, the Swift Mighty Meaties showed up for an All-Filipino Cup semifinal game against the Coney Island Ice Cream Stars with their players and coaching staff, led by head mentor Yeng Guiao, bald-headed.

In the photo, who was the former national team player in the No. 6 uniform for Ysmael Steel? 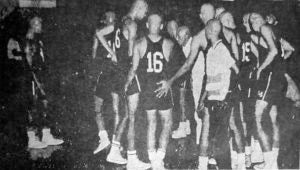 52. This shooting forward was discovered from the South and was recruited to suit up in the old MICAA during the 1970s.

A product of the University of San Carlos, the 6-3 native of Cebu City saw action in the old MICAA and then played two seasons with the Mariwasa Noritake Porcelain Makers in 1975 and 1986, averaging 9.1 points in 81 games.

His nickname is HF. 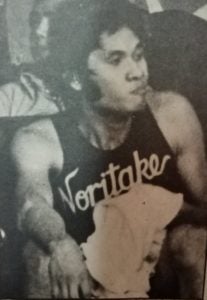 53. This handsome player (No. 7) from De La Salle, who is pictured here sizing up the defense of an Ateneo opponent in a game for the second-round title flag, helped guide the Green Archers to the NCAA diadem on November 20, 1974 at the cavernous Araneta Coliseum.

This 5-8 point guard was a classmate of mine when we both entered the Taft Avenue institution as freshmen in June 1972, or just three months before the declaration of martial rule.

Sorry folks, he never played in the PBA although he found a coaching job in Asia’s first pro league. Moreover, he worked for the family-owned restaurant chain.

Who is he? His initials are VV. 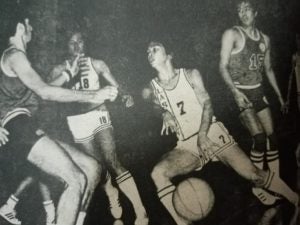 In the photo, Lim is lifted by this curly-topped teammate (No. 8) of his in jubilation.

The 5-11 forward, who played for Xavier School in his secondary academic years and was a member of the first of the Golden Stallions’ 10 Juniors title teams in Tiong Lian league history in 1972, made significant contributions with La Salle after Lim completed his NCAA eligibility in 1974.

Then again, this guy, who has an elder brother who starred for San Beda College in the NCAA during the late 1960s and even became an actor, never made the PBA grade.

Who is this No. 8 De La Salle player? His initials are HB. 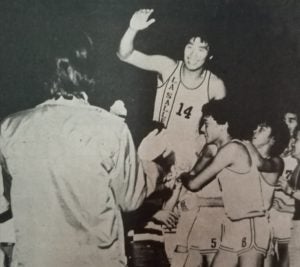 55. This unassuming, baby-faced sharpshooter, a master of the booming long toms, saw action with Manila Bank in the MICAA during the early 1970s.

He was a member of the Philippine national team that grabbed the gold during the 1974 Asian Youth Basketball Championship held in Manila. For some reason, the 5-9 guard subsequently left the country and migrated to the United States.

Following a three-year stay there, he returned to his land of birth and saw action with the Tefilin Polyesters in 1980.

He played with Tefilin for two seasons, averaging 12.5 points in 57 appearances, before calling it quits.

What is his name? His initials are FDG. 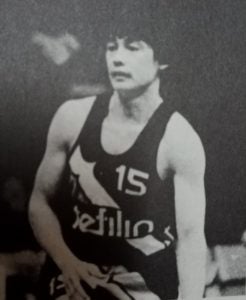 56. It was the year 1971. Collegiate freshman Lim Eng Beng and De La Salle squared off against two-time league MVP Fortunato (Atoy) Co Jr and Mapua Institute of Technology during an NCAA game.

Before the game, the flamboyant Co told Green Archers skipper Miguel (Mike) Bilbao that he would score 50 points vs. Lim and company. Co actually did net a 50 but La Salle prevailed, 91-89.

It was no different story from their Tiong Lian duels in high school.

Co, a product of Philippine Cultural High School, romped away with the MVP hardware twice but it was Lim’s team, Chiang Kai Shek College, that brought home the title each time.

In 1971, the Green Archers took the NCAA diadem under coach Valentin (Tito) Eduque.

In photo, Co protects the lane as Lim tries to navigate around this Cardinals playmaker. In the background is Eng Beng’s teammate Julian Lim (No. 7), who a year later sadly passed away in an auto accident in the U. S.

The MIT guard defending Lim was a 5-9 guard more known for his Afro looks. The Caloocan City native played in the MICAA for a few years but saw action in the PBA for just the inaugural edition of the pro circuit in 1975, norming 2.8 points in 20 games with Crispa-Floro Redmanizers.

Who is he? His initials are EL.

57. He was once the M-A-N, a cerebral, high-scoring Cardinal from Mapua Tech who later played in the PBA. This lanky 6-3.5 utility player – can play center, forward or guard – was a member of the gold medal-winning RP team to the 1978 Asian Youth Basketball Championship, where among his teammates was ex-PBA player-turned actor-and-politician Joey Marquez.

Who is he? His initials are JB. 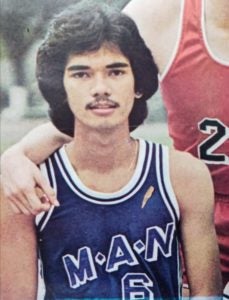 58. This photo was taken in 1964. And it featured the Yutivo Opels team that gave powerhouses Yco and Ysmael Steel a run for their money in the old MICAA. The player who donned the No. 5 uniform was the Opels’ do-everything star.

Not surprisingly, this 6-2 player suited up for the RP team on three occasions – 1968 Mexico Olympics, 1972 Munich Olympics and 1973 ABC tournament that the country emerged victorious before an electrifying home crowd.
Do it you way, name me the player that wore No. 5?

His initials are RM. 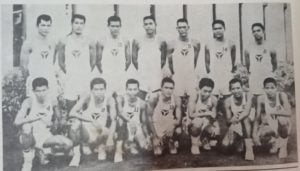 59. This UE Red Warriors team nailed down the 1966 UAAP crown. Name me the player that wore the No. 5 jersey.

He was a perennial national team prospect, seeing international action for the first time with the Philippine squad that snared the 1967 ABC crown over host South Korea in the championship game while still playing collegiate ball, and then later became one of the most colorful player and coach in PBA annals.
His initials are RJ. 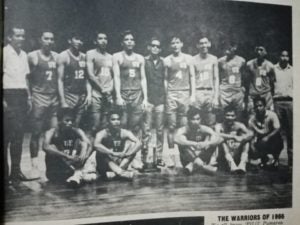 60. This 6-1 forward starred in Sugbu’s premier collegiate league CESAFI during the mid-1960s with the University of San Carlos andthen moved on to Colegio San Jose de Recoletos in 1970-71 (where Bernard Fabiosa was a teammate ). He was recruited to play in Manila for De La Salle, where he played second fiddle to Lim Eng Beng during the 1972 season.

Soon, he hooked up with Crispa and Concepcion Industries in the old MICAA. When the PBA opened shop in 1975, he donned the colors of the Crispa-Floro Redmanizers until April 1979 campaign when he was traded to the Universal Textiles Wranglers, where he was employed till his retirement in 1981. In seven PBA seasons (1975-81), he averaged 5.8 points in 163 games.

Turn back the pages of time.

Who is he? His initials are RP.