Anak ni Ka Tunying na si Zoey Taberna cancer-free na: I thought it was the end for me, that my life would end at 13... Bandera

Anak ni Ka Tunying na si Zoey Taberna cancer-free na: I thought it was the end for me, that my life would end at 13…

Anak ni Ka Tunying na si Zoey Taberna cancer-free na: I thought it was the end for me, that my life would end at 13… 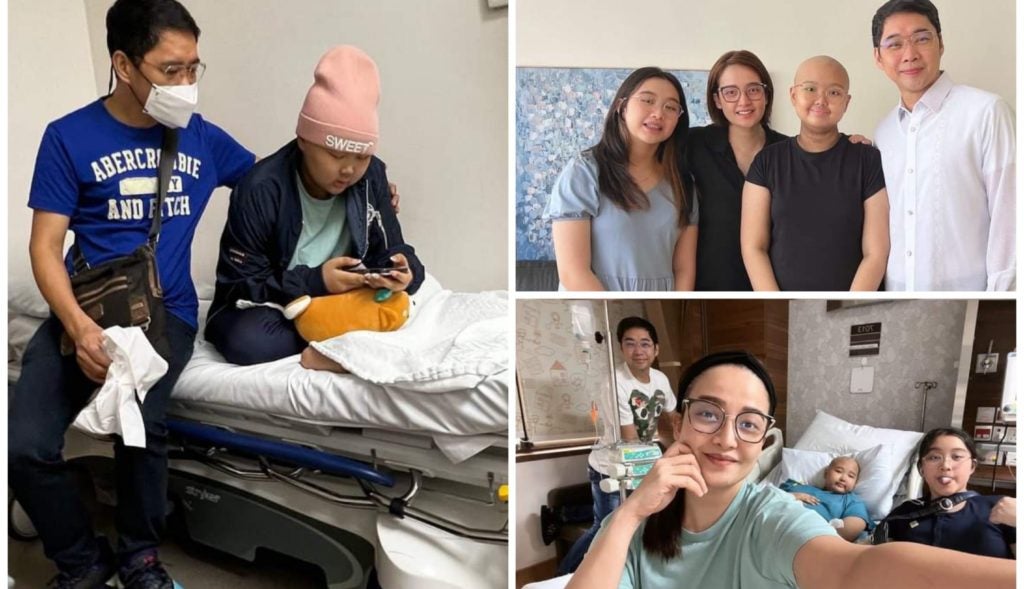 “As some of you know, i was diagnosed with leukemia on december 2019. since then, I have been undergoing chemotherapy. everything was going on smoothly, and complications were very minimal.

“My hair had grown a lot and i was getting back to feeling normal, as i could do a lot more things than i could when i was weaker,” panimulang kuwento ng dalagita.

“But my situation changed when december 2021 came. During this time, I would not feel well often and several parts of my body were hurt.

“When they brought me to the hospital, they did tests and said that i had problems with my blood sugar because it was way higher than it was supposed to be,” pagpapatuloy pa niyang kuwento.

“But as they looked into it more, after getting the results of my bone marrow aspiration, we found out that my acute lymphoblastic leukemia had morphed into acute myeloid leukemia.

“And this meant that all of the cancer cells that was supposed to be long gone, came back in a way more dangerous and fatal form,” lahad ni Zoey.

Dito na nasabi ng anak ni Ka Tunying na hindi niya maintindihan kung bakit nangyayari ito sa kanya, “I had a hard time understanding why this was happening because from the start, my doctors said that this situation was very rare.

“I was supposed to repeat all my chemotherapy again in the philippines, but of course, my parents wanted the better option, so that we could be sure that i will be fully healed,” aniya pa.

“My doctors recommended for us to go to singapore because medical care is really good there. so my parents did their best to find a way for us to get there, even during the pandemic.

“Luckily, we were given permission to go. all of this happened in a span of just 3 weeks so i really still couldn’t process everything in my mind.

“I didn’t want to leave home, especially because my family and friends were there, and we had to be away for around 6 months. and when i heard that i was going to do intensive chemo again, i got so scared.

“Especially because i already knew how it felt, because this already happened before. i knew how weak i was gonna be. i knew that i would have headaches 24/7 and would throw up all the time.

“We left home on the 3rd week of january. when we got there, almost immediately, the chemo started. my doctor explained to us that i would be having 2 chemo cycles and a bone marrow transplant,” dire-diretsong kuwento pa ni Zoey.

“Because i needed a transplant, we needed a donor. So my parents and my sister got tested. and luckily, my sister was the perfect match, so she became my donor.

“Helga being my donor didn’t worry me much because the doctor said that it was just like a blood transfusion. But after a while, we found out that helga would also have to go through multiple procedures.

“Like often blood extractions and different injections. i started feeling guilty because i’m the reason why she has to do it. If they would do those to me, i wouldn’t care, even if it hurt, because i’m so used to it already. but it was my sister. she’s never even been confined!

“I don’t like her feeling pain. plus she didn’t even have a say about going away from home. i felt like i deprived her from being with the people she wants to be with and going to places she wants to go to because she was stuck with me.

“So i’m more than grateful that she did this and sacrificed for me. Everything that i went through here definitely wasn’t easy, especially because of the side effects of my treatment,” aniya pa.

Dagdag pa niya, “I experienced things that, looking back now, even i thought i wouldn’t be able to handle. but with the support of my loved ones and God, i was able to get over.

“Literally every bad thing that happened to me was such a blur. i’m not gonna lie, there were so many times that i thought that it was the end for me. that my life would end at 13 years old.

“I kept on thinking about my friends, my family, my loved ones, my church duties. what will happen when i’m gone? will people care? will they be sad? But because i grew up active in church, i always prayed while holding on to my faith, and i felt so much stronger.

“When i try to remember some of the difficult episodes that happened to me, the only thought in my mind is ‘wow. nagawa ko pala ‘yon.’

“It’s really shocking for me because i’m the most paranoid, emotional and easily scared person i know. i am certain that if God wasn’t there to give me the strength i needed, i wouldn’t have done it.

“After those things happened, seeing other people be proud of me made me happy. when others show me how much they care for me, i feel so thankful to the point that i think that everything i went through is worth it, despite being in terrible pain,” sabi pa niya.

Patuloy ni Zoey, “After the transplant, we had to stay in singapore for 100 more days to observe my condition. seeing myself get better everyday made me so happy and grateful.

“We would encounter small complications here and there, but they’re nothing big. Some of our family and friends also visited me, and distracted me in the times i wouldn’t feel okay.

“We also had a lot of fun there when i became stronger. and the day i’ve been waiting for came. After 167 long days, we went back home to the philippines. and now i am totally cancer free!

“I would still have check ups and maintainance drug infusions from time to time, but that is nothing compared to what i’ve been through.”

“I couldn’t have done all of this without the help, support and love of everyone special to me and most of all, God. I never forget to thank Him everyday for healing me and for giving me a chance to live a longer life.

“Thank you also to everyone who prayed and showed their support for me all throughout everything. i guess it’s safe to say that that’s the end of my cancer journey. thank you so much,” masayang sabi pa ni Zoey.