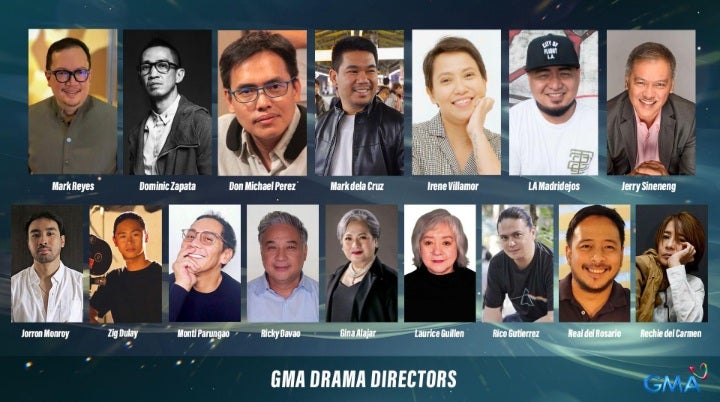 “I am most excited with the prospect that I will be working with a group of actors, creative team, staff, and crew, whom I have never worked with before,” pahayag ni Direk Jerry sa isang press statement.

Aniya pa, “I believe that life is a continuous learning process, and I am excited to interact with a different brand of talents.”

Newly-signed director Jerry Sineneng, on the other hand, is looking forward to working on a new horizon, “I am most excited with the prospect that I will be working with a group of actors, creative team, staff, and crew, whom I have never worked before. I believe that life is a continuous learning process, and I am excited to interact with a different brand of talents.”

Aniya pa, “I am very thankful to GMA that they gave me the chance to direct different genres from all forms of dramas, to live shows around the world for GMA Pinoy TV and live Sunday afternoon musicals and films as well.”

Ayon naman kay Direk Don na nagsimulang maging Kapuso noong 2005, “Since then I have gone on to direct numerous shows, anthologies, and series for primetime and afternoon prime. I would say I have been able to hone my craft to meet the demands of the current TV landscape.”

Umaasa naman si Direk Mark dela Cruz na mas lalawak ang kanilang audience reach, “With all the new emerging media platforms, I’m looking forward to new genres that will tackle a wider range of audience not only in the Philippines but targeting the global market.”

Chika naman ni Direk Irene, “I’ve been privileged to have been allowed to bring some aspects of how I do films into TV. There are technical and production principles that have been applied in my last shows.

“So with all this exploration, I hope to continue in the upcoming projects and push for quality in all aspects. I hope to ride on the trend that film and tv are no longer different in terms of production value and story.”

Samantala, ito naman ang naging pahayag ni Direk Dominic sa patuloy na pagtatrabaho niya sa GMA, “With every new project I continue to be genuinely thrilled with the process of its creation, and every time I am still fascinated with how I can execute a script in a different, perhaps fresh new way. For me, there is a pureness in the joy of telling a story.”

Ani Direk Gina, “Since I am a fan of Korean Dramas, hopefully in the future we can try different approaches in the making of, different star combinations, and hopefully we can have more epic dramas.”

“In all the years, I have been a director with Kapuso, I have felt very happy and at home. Kapuso has always kept a personal and professional connection with me, which I value very much,” aniya pa.