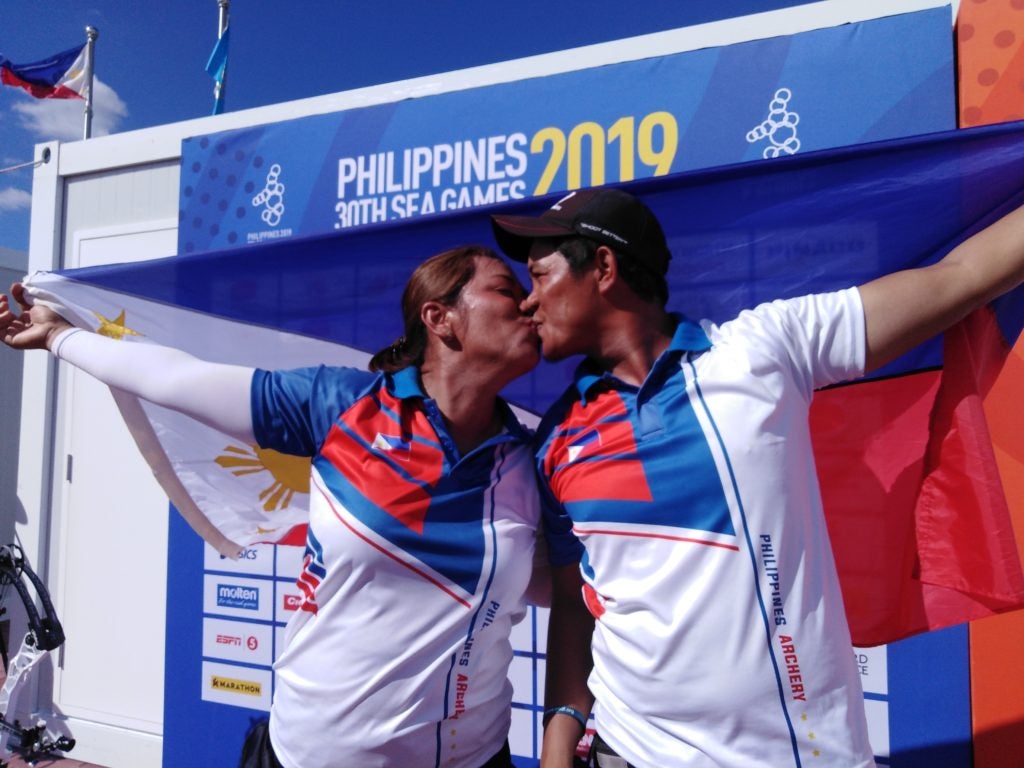 EVER since that one sunny day when archer Paul Marton dela Cruz’s heart was struck by Cupid’s arrow during the Philippine National Open in UP Diliman in 2004, he knew that Rachel Cabral is the partner in life he has been aiming for.

For almost 15 years now, they shoot arrows and build dreams together — for country and for their future.

Conquering all odds a married couple may encounter while juggling with national team duties, the couple achieved the most glittering feat so far by winning the gold medal in the 30th Southeast Asian Games as a tandem.

Just when the Philippines was about to exit empty-handed in the archery competition of the 11-nation meet, the couple salvaged the country’s campaign in archery. Hard work, eagerness to win and teamwork paid off for the Filipino archers.

They outpierced the younger Vietnamese duo of Chau Kieu Oanh and Nguyen Van Day, 148-147, in the mixed team compound event on Monday at the Clark Parade Grounds in Pampanga to win the gold.

Individually, it wasn’t the first time they played in SEA Games as Paul snagged bronze in individual and team compound two years ago in Malaysia.
Rachel, an Olympian, last bagged a medal in 2005 with a bronze.

She, however, became inactive for quite some time after giving birth to their angels, five-year old Ezekiel Paul and toddler Lady Akie.

That’s why nothing’s more special than this golden celebration together.

The Dela Cruzes, who are happily married since tying the knot in 2012, said that their inner connection fortified their desire for triumph. They didn’t expect to claim victory against strong opposition during preliminaries versus Thailand, Malaysia in semifinals and Vietnam in finals.

It mattered as Rachel shoots her last arrow for 10 points that sealed the gold medal.

In the awarding ceremony moments later, they sealed their victory with a kiss.

Consoling each other also eases the nerves and boosts confidence in a sport where disciplined concentration and being dead-eyed is a must to hit bullseye.

The 33-year old husband recalled that he was inspired by his 34-year old wife’s marksmanship that pushed him to pursue archery and most of all, her love.

She guided him to polish his potential in the beginning. Their happy ending followed.

Hand by hand, they even managed home equally like what they do during tournaments. The same way they take responsible of raising their children accordingly.

The parents plan to make time with their kids after a long preparation abroad.

Their inspiring story is a testament that in marriage and in sports, teamwork paves way to victory as long as they win as one.