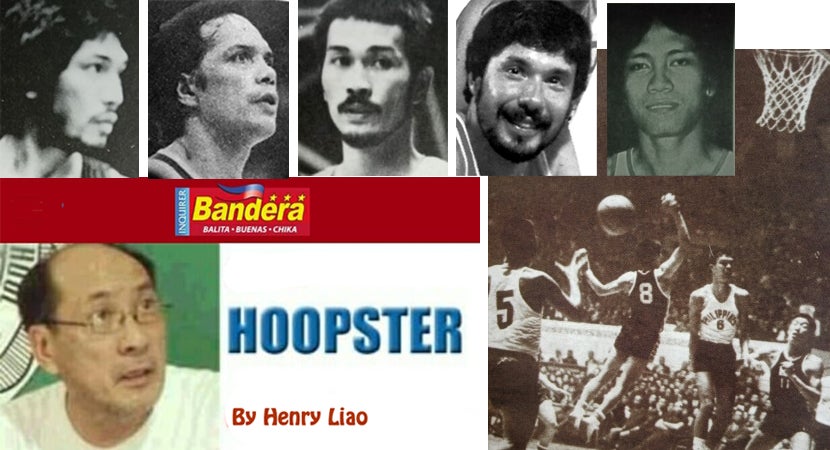 31. Michael Jordan hogged the NBA headlines when he wore black and red shoes (instead of the traditional white-colored footwear) made by Nike during his NBA debut in 1984-85. The NBA banned the shoes three games into the campaign but a defiant Jordan stood pat and then-league commissioner David Stern started fining him at $1,000 a game, then it went up to $3,000 and eventually $5,000.

Before long, though, the NBA relented and non-white colored shoes soon it became acceptable and fashionable to wear any colored shoes to the NBA games.

Still MJ was more than a decade away from breaking the traditional norm of wearing white game shoes.

In local shores, this 6-3 center-forward led Colegio de San Juan de Letran to the 1970 NCAA title over De La Salle and wore black Converse Chuck Taylors shoes to the Games when he joined San Miguel in the old MICAA during the 1960s.

This caught the attention of many hoop fans as this Pili, Camarines Sur native was the only player not having the white footwear.

His initials are DR. 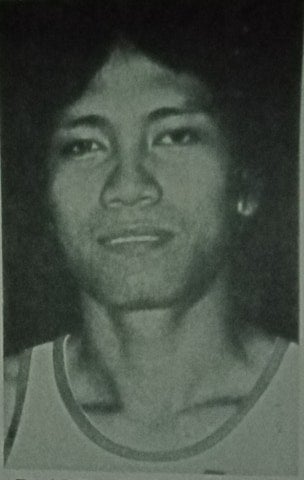 32. This pesky 5-9 guard known for his speed and hustle was a product of the 1970s out of Southwestern University in the premier Cebu collegiate league CESAFI.

A master of the fastbreak plays, the native of Jimenez, Misamis Oriental moved to Manila to join Mariwasa in the old MICAA in 1971.

He was a member of the gold medal-winning Philippine team to the 1st Asian Youth Basketball Championship in Seoul, South Korea and played for the silver medalist-winning Nats in the 1971 ABC tournament in Tokyo, Japan.

Loyalty was in his system as this dependable playmaker remained with the Mariwasa Noritake team that made his pro debut in the PBA in 1975.

He stuck it out with the franchise when it became the Honda Hagibis, Finance Inc. and Galerie Dominique and finished his eight-year tenure (1975-82) with a 10.5-point clip in 264 games with the Emerson Cosetrng-owned club.

His initials are JS. 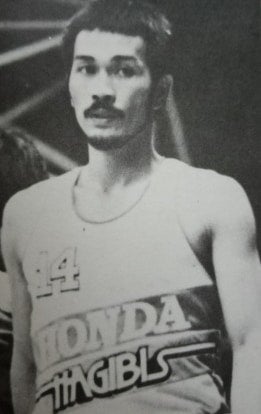 33. This player with a straight-as-a-stick frame is one of the famous alumni of the University of Manila.

The 6-foot forward from Dinalupihan, Bataan played in the MICAA then suited up for the CFC Presto franchise when the PBA debuted in 1975 where he was the Ice Cream Makers’ top gun with a 17.9-point clip.

After calling it quits as a player, this fella turned to collegiate coaching. He was the top bench strategist for the UM Hawks team that won 86 straight games and five titles in the NAASCU’s first five editions from 2001-05. 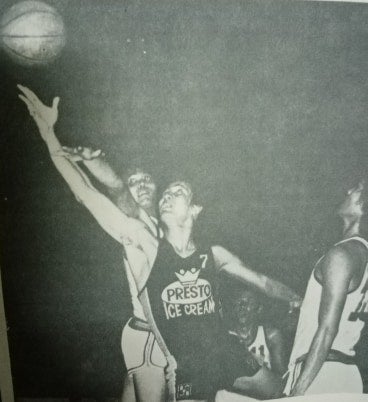 34. He was monikered “Taong Bato” with his physical, rugged ways in the old MICAA with the Concepcion Industries club and this carried on when this 6-2 forward from the University of San Agustin moved into the pros with the Concepcion Carrier Weather Makers in the PBA’s maiden 1975 campaign.

Early in the league’s second season, he transferred to the Universal Textiles Wranglers, where he flourished and would retire in 1981 after seven seasons (1975-81) and average 10.5 points in 275 games.

The bearded frontliner suited for the RP team that topped the 1972 Asian Youth Basketball Championship in Manila.

His initials are JN. 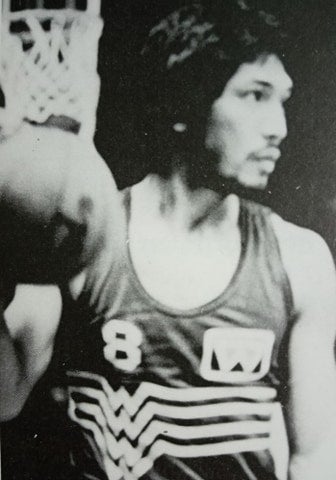 35. This charming, mestizo-looking 5-10 guard was a member of the power-packed Ateneo team that captured the 1969 NCAA title. He earned the sobriquet “Mr. Clutch” for his ability to hit a shot at crunch time.

The Bacolod City native, who played soccer during his childhood days, lasted just one season with the Blue Eagles due to academic woes before hooking up with the Meralco Reddy Kilowatts in the old MICAA.

He joined his Meralco backcourt partner Robert Jaworski when the Komatsu Comets were formed in 1973, with the latter winning the MICAA crown in their maiden season.

The bearded guard was a vital cog for the Philippine team that won all its 10 assignments and beat South Korea in the finals for the 1973 ABC title held in Manila. He also saw action in the 1974 World Basketball Championship in San Juan, Puerto Rico.

Known for his floating layup and fancy behind-the-back assists, he suited up for the Toyota Comets/Tamaraws/Super Corollas, where he won nine titles, and Ginebra San Miguel Gin Kings for 12 seasons from 1975-86 with a 16.8-point average in 613 appearances.

He later migrated to California in the States and became a pastor.

His initials are FA. 36. Rafael (Baby Boy) Morales was known for his leg-extending jumper while suiting up for Ateneo de Manila during its 1969 NCAA championship season. Among his teammates with the Blue Eagles were hotshots Luis (Chito) Afable Jr., Marte Samson, Ricardo (Joy) Cleofas Jr., and role players Lyle Ross Jr. and Richard Palou.

In this photo, a fellow back in the 1950s and early 1960s was famous for his “bicycle-kick” shooting style.

In one game during 1956 Melbourne Olympics, this PH national player ran rings around Team USA’s Bill Russell that the soon-to-be winningest player in NBA history was unable to block his “bicycle-kick” shot.”

What is his name? His initials are CB. 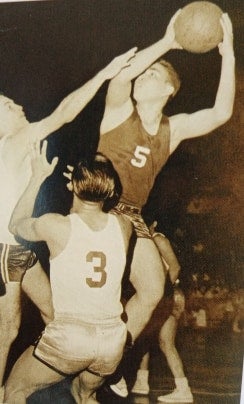 37. A Philippine national team player in the 1960s and 1970s, No. 6 is more known for his parking lot-distanced outside bombs long before the three-point shot made its debut. He also had a knack of banking his undergoal stabs with his back to the basket.

Yet in this photo, this Ysmael Steel great was making a nifty no-look pass to a teammate (No. 5) in a game against host South Korea that produced a gold medal for the Filipinos in the 1967 ABC tournament. 38. Of course, any hoops follower worth his salt knows Fortunato Co Jr., who started his post-college career out of Mapua Institute of Technology in 1972 with the Crispa Redmanizers.

Unknown to many, Co donned the national colors in the 1972 Asia Youth tournament in Manila. He wore jersey No. 5 when he started with Crispa before eventually switching to his famous No. 6 jersey with his cute moustache.

But in this photo, who was the player in Quasar uniform that was putting the defensive clamps against Co?

Boy, do you know the former San Sebastian Stag?

His initials are AM. 39. It was always No. 7 for this hard-nosed player from the University of the East. But in his lone Olympic stint, during the 1968 Mexico Games, this guy wore a No. 15.

A bruiser, he was well known for his barreling drives and physical defense. Before long, he even became a coach not only for a club team but also for the national squad.

His initials are RJ. 40. A Philippine national team player, he was a product of De La Salle College, winning an NCAA seniors title in 1956.

His favorite skyhook shot and No. 33 jersey reportedly inspired another ganging center (Lewis Alcindor) from UCLA

in the U S. NCAA during the mid-1960s to follow his game style – and jersey number as well.

His initials are KB.